Which IT companies are now hiring the most?

How has the IT job market developed over the past years? And what are the most important character traits that the companies are looking for when hiring a junior? Find out this and more on how recruitment of junior developers works in the interview by Andrew Elliott, CEO and Co-founder of Techloop.

How has the market changed since 2016 when we started our bootcamp?

The most visible market change since 2016 is continuous and increased demand in terms of IT specialists. Digitalization of every business sector is happening. By now you will most likely see every market segment from FMCG, banking, healthcare, logistics, and many others in need of an internal or external IT team.

What are the latest trends on the market?

The trends continue to evolve, most prominent though are roles for web applications, cloud, DevOps, security, AI, or data analytics. In terms of technologies, we see continuous interest in hiring specialists with, for example, JavaScript, React, Node, and similar but also areas such as Salesforce, SAP, and other niche technologies.

Who are the top companies that are actively hiring in CZ?

There are many companies that are actively hiring in CZ so it’s hard to pinpoint just some of them. From those that we see very active include larger stable groups like SocialBakers, Etnetera, O2, Barclays, but also many growing companies like LaFluence, Medallia, PipeDrive, uLekare and more.

Czech Republic is known as having one of the lowest unemployment rates in Europe. What are the best strategies that companies have to attract tech talent?

The demand for IT talent in the Czech Republic has been long term very high, which creates a competitive environment for hiring new talent. Besides increasing financial compensation, companies offer flexible working hours, WFH (home office), ability to join different global conferences or training events. Most often though, the deciding factor for many is the actual project, tech stack, and purpose of the role/project.

How many developers are needed at this moment? Has it been influenced by the COVID-19 situation?

Based on our data, we estimate that around 30,000 IT talents are still lacking for the local market. Every year new university graduates or junior developers are welcomed into companies. Many companies offer internships or other internal training that can boost their career forward. With the recent economic changes due to COVID-19, the hiring has slowed down for junior developers (or roles in general), and companies are more careful in their selection due to restrictions on hiring budgets. We believe that trend will last for the upcoming months, but not long term due to still a large gap in the market. 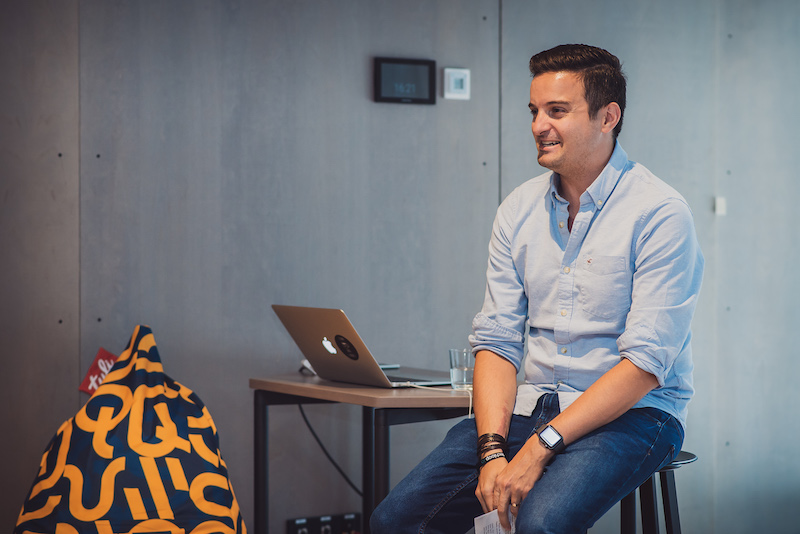 Andrew during his presentation at the Demo Day

Which programming languages or skills that we teach in the bootcamp are in the biggest demand at the moment?

As mentioned previously, a larger part of the demand is related to JavaScript, React, Node, PHP. Individuals that have a good understanding of UX/UI are also in demand for frontend focused roles. Other areas we see strong demand still include technologies such as C++ for finance or security related roles, Java, C#/.NET, Python, Perl, and Ruby.

Can you tell us what a junior developer should expect during interviews?

Interviews vary depending on companies and type of role. It’s hard to define a universal process that works for each interview. In terms of juniors, the most common trend is focusing on your ability to learn quickly, logical thinking, and understanding of methodologies. If a company typically can see that a junior developer is a quick learner, has a solid understanding of basics, and is a strong problem solver, these are the stepping stones to getting a potential offer. There is not a large difference between small or large companies, except in the time it takes to complete a hiring process. While smaller companies are more agile and quicker to decide, a larger company may include more steps in the interview process or take time to approve a final offer.

Can you describe a typical interview process for a junior software engineer?

A larger portion of companies interviewing for a more junior engineer will typically split the process into 2 rounds with some test or code review. The first round interview will typically consist of a HR intro to the company culture, specific role, and invite an IT team lead to join the discussion. After or during the interview, an IT task is provided to be done.

The second round of interview will conclude with a discussion around the completed task, understanding the problem solving related to the task or code review. This is mainly conducted by the IT team lead. If all goes well, an offer is later presented during a follow up call or at a 3rd and final meeting.

Do you have any advice for people who are thinking about changing a career to IT?

Anyone who is considering a career change into IT is betting on a stable market segment that has a very good upside for the future. The demand for IT specialists will only increase, and the speed that IT is evolving is incredible. On the other hand, someone that does change their career for IT should be naturally curious about IT, have a driven mindset to learn and self educate themselves. It’s a career path that is very rewarding for those that enjoy problem solving, challenges self ability to learn more and take pride in their work developing the future!

How does our Job Guarantee Scheme work?