Why do a coding bootcamp after graduating from computer science?

Itana decided to study at a coding bootcamp after getting a BSc in Computer Science from the Sorbonne University.

Share:
Itana loves coding. She has always been into math and problem-solving. She wanted to find a meaningful application of both which brought her to programming. Originally from Montenegro, her journey led her through France and Norway, before landing her in Prague.

How did your journey as a programmer start? What was the initial impulse?
Before the bootcamp, I graduated with the BSc in Computer Science from the Sorbonne University. But my first two years were in applied mathematics. Therefore, the majority of my subjects were in mathematics, with only a few introductory courses in CS. Soon I realised that I enjoyed coding as well as implementing mathematics in a different way- not just studying theory. So I decided to switch majors and do Computer Science.

What was the major issue for you?
Because of my mathematical background, I was advanced in theory, like algorithms, logic, and statistics, but I lacked practice. I had problems implementing algorithms in different programming languages simply because during the first two years, I spent more time studying maths than coding.

So you decided to catch up?
As a graduate of Computer Science, you are expected to programme in your free time. You should create projects, use Github to show your work, and create a rich portfolio. But I could not find spare time to work on side-projects, because I skipped two years of important CS lectures and I needed to catch up. Therefore, I decided that after graduation I would take a year off to create a nice portfolio, study new programming languages, create something interesting, all the while figuring out what I wanted to do in the future.

And that brought you to Prague.
During my last year of university, I spent one semester in Norway. Back then, I knew I would take a gap year, so I was looking for an internship or an intensive coding program. While searching for an internship in Prague, I came across Coding Bootcamp Praha and asked myself “Why not?”. I liked the idea of spending three months coding every day, creating web applications with the help of experienced mentors. I decided that it would be a perfect way to get the inertia I needed to continue developing on my own.

So, you said you took up coding because it was connected to math.
After studying applied mathematics, you can do whatever you want. For example, you can pursue a career in finance, economy or a similar field. I decided to do coding. I believe that studying maths helped me a lot. It is a way of thinking and approaching problems. The major difference is that instead of using paper to solve them, you use your computer.

How did going to Bootcamp help you?
At the university, we would spend hours listening to lectures and then go home and do some exercises. It was exhausting and I didn’t have time to create anything bigger. But here in the bootcamp, you learn by implementing practical examples and creating real life applications. Most of the things I see here I have already seen before, but I can finally say that I understand them perfectly. Therefore, I feel really happy at the end of the day and it gives me more self-confidence. 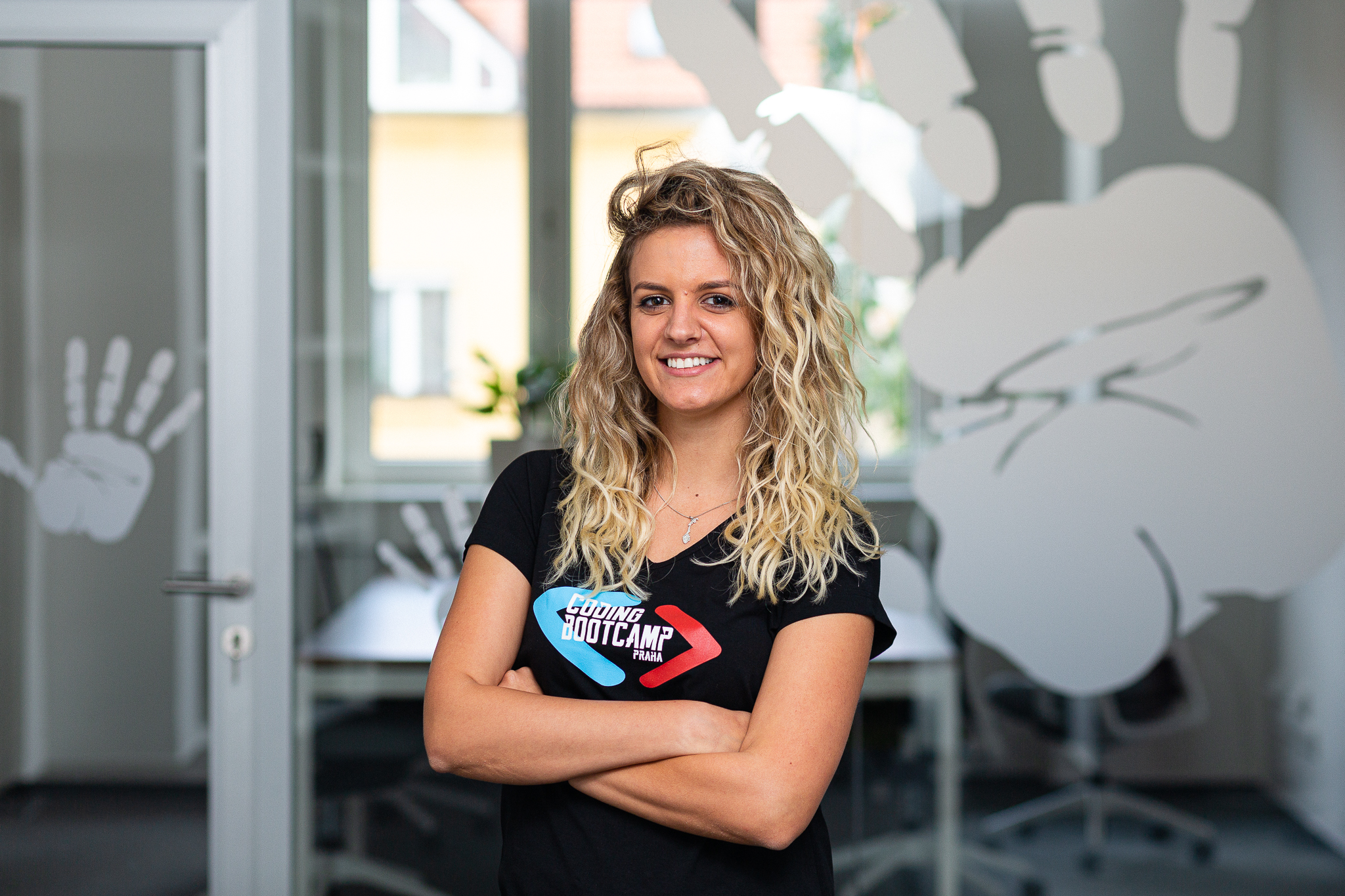 So far, what have you enjoyed the most?
The hackathons are amazing because you create an app completely from scratch in just a day. During hackathons, you don’t only code, but also develop soft skills such as working in agile teams. Also, I like how the bootcamp syllabus is structured and how fast we advance. For example, we did JavaScript for two weeks. On Monday we started with basic principles and on Friday the following week, we created a Pacman game from scratch.

The feeling when you see what you can do, especially when you thought it would be hard is amazing. You can literally see your knowledge come to life.

What did you expect from the Coding Bootcamp Praha?
I read a lot online and found YouTube videos from people who had already graduated from coding bootcamps. Everyone said that bootcamps are tough and intense, and especially fast-paced. Which they are. We have lectures from 9 to 5, and most of us stay until 6-7 to study and finish homework.

Another thing is, when I saw the syllabus, I wondered how they would squeeze everything into three months and if we would be able to learn it all. But each technology written in the syllabus was learned in-depth, and in my opinion, all important topics for becoming a Full-Stack developer were covered. The program was well organised, we had amazing mentors and I learned a lot!

So has it lived up to your expectations so far?
Yes, definitely! We learn new things every day, repeat them and improve our skills. It is not only technologies we learn, but also good practices and industry standards. When I think about what I knew two months ago, I see an amazing improvement. You may not be aware of it, because you do something new every day, and it is fast-paced, but if you look back, you can see a big difference.

How did you prepare for the bootcamp?
I went through all the pre-bootcamp materials that we were provided by the Bootcamp team. There was one amazing video by an American teacher from Harvard. We were told to watch a couple of them. But I decided to watch them all :) Those videos were really useful! I would recommend them to anyone wanting to start a tech career.

How would you rate your progress so far?
I am simply happy. I made coding my daily habit. By doing it every day, I've gained confidence. And that´s exactly what I wanted was to get used to coding every day.

So you've made huge progress, both in your knowledge- and on a personal level.
I've become so much more practical!

At Coding Bootcamp Praha, there are so many women. How does it feel to be one in what used to be considered mainly a men's field?
At the university, in Math lectures, there were a lot of girls. But in Computer Sciences, boys were the majority. I believe that the number of girls in tech is growing, and I strongly encourage every girl to try coding. It is not a gender thing, it is whether you like problem-solving or not. We are five girls here in the bootcamp, and the atmosphere is healthy and normal. The whole group we have is amazing. People are respectful and supportive. We love to help each other.

Is there a message you would like to share with students?
If you are interested in coding, do not be afraid and go for it! Also, if you don’t know anything about coding and love problem solving, try it! Several guys here used to work in different fields: as lawyers and so. For many people, coding, Artificial Intelligence or Big Data may feel supernatural. But in the end, they are all just skills you learn, like any others. It just takes will and time to study!
Programming makes you learn every day, and it challenges you with every task. It is the challenges that make us grow. And in programming, you are rarely in your comfort zone. The tech field is developing fast, and there are a lot of resources online. But many of these will soon become depreciate. So in the beginning, it is always better to have someone experienced to guide you.